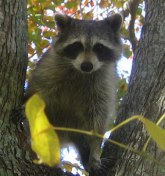 Jasper (GA) - A Talking Rock (Pickens County) resident is now undergoing post-rabies exposure treatments after breaking up a fight between the resident’s two dogs and a raccoon that has now tested positive for rabies. The dogs were not vaccinated; therefore, the owner decided they would be euthanized.

The positive rabies test result for the raccoon was returned by the Georgia Department of Public Health Laboratory on January 22.

According to Jan Stephens, manager of Pickens County Environmental Health, the fight between the dogs and the raccoon occurred early in the morning of Saturday, January 18 at a residence off of Talking Rock Road about two miles from where two previous rabies cases were found within the past three years - one was a raccoon and the other was a fox.

"In this incident, the dogs were bitten on their noses while fighting the raccoon," Stephens said. "Both dogs had to be put down because they’d had a definite exposure and had never been vaccinated for rabies."

Stephens added, "It’s just fortunate the owner realized what had happened and that the raccoon was available for testing. If the raccoon had escaped, no one would have known it was rabid and rabies exposure could have occurred to other people and animals."

Health officials continue to urge residents to maintain current rabies vaccinations in their pets so that they will be protected in case contact with a rabid animal occurs. Most importantly, preventing rabies in pets will also provide a buffer of protection from rabies to humans.

For more information about rabies and its prevention, please contact Pickens County Environmental Health at (706) 253-0900 or log onto the Centers for Disease Control and Prevention (CDC) website at www.cdc.gov/rabies.