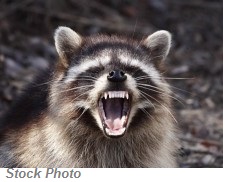 Jasper (GA) – Two dogs in Pickens County were potentially exposed to rabies after coming into contact with raccoons that later tested positive for the disease.

Jan Stephens, manager of Pickens County Environmental Health, said the first incident occurred at a residence in the Jerusalem Church area on February 24. A dog at the home that was not yet old enough to have had its initial rabies shot was observed being intimidated by a raccoon. The dog owner shot the raccoon and environmental health submitted it to the Georgia Department of Public Health Laboratory for rabies testing. The positive results were confirmed on February 26.

The dog is under quarantine for six months. After five months in quarantine, the dog will be given a rabies shot and will remain quarantined for the final month.

The second incident was on March 9 at a home in Talking Rock on the Pickens-Gilmer County line. A relative of the homeowner saw the raccoon attack the owner’s dog, so the relative shot the raccoon. The raccoon was prepared and shipped for rabies testing on March 10, and the positive rabies result was returned on March 11.

There were no visible wounds to the Talking Rock dog and its rabies vaccination status was current; therefore, the only treatment required for the dog was a rabies booster shot and it will be monitored for 45 days.

Residents are reminded to maintain current rabies vaccinations in their pets so they will be protected when exposure to a rabid animal occurs and to never handle any unfamiliar animals, either domestic or wild.

For more information about rabies and its prevention, please contact Pickens County Environmental Health at (706) 253-0900 or log onto the Centers for Disease Control and Prevention (CDC) website at www.cdc.gov/rabies.