Woodstock (GA) ~ A Woodstock man is being treated for rabies exposure after a stray cat bit him. The cat has now tested positive for rabies.

According to Cherokee County Environmental Health officials, the man was attacked on December 1 as he responded to sounds of cats fighting outside his home in a neighborhood near the intersection of Hickory Flat Highway and Creek Hollow Drive. A white and gray cat he had often fed was there and it started rubbing against his legs. However, the cat suddenly became aggressive and bit him. The cat ran away, but when it returned, the man shot it. 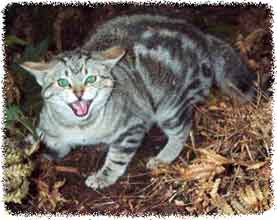 Rabid cat
(Stock photo, only - not the cat in this story)
The incident was reported to environmental health on December 6 and the cat was shipped to the Georgia Public Health Laboratory that same day. The lab reported the positive test results for rabies on December 10.

Rabies is almost always deadly in humans who contract it and do not receive treatment. People must recognize the exposure and promptly get appropriate medical treatment before developing rabies symptoms.

Health officials urge residents to protect against rabies by maintaining rabies vaccinations in their pets and to avoid contact with all unfamiliar animals, both domestic and wild.

For more information about rabies and its prevention, call the Cherokee County Environmental Health Office at (770) 479-0444 or log onto the Centers for Disease Control and Prevention (CDC) website at www.cdc.gov.