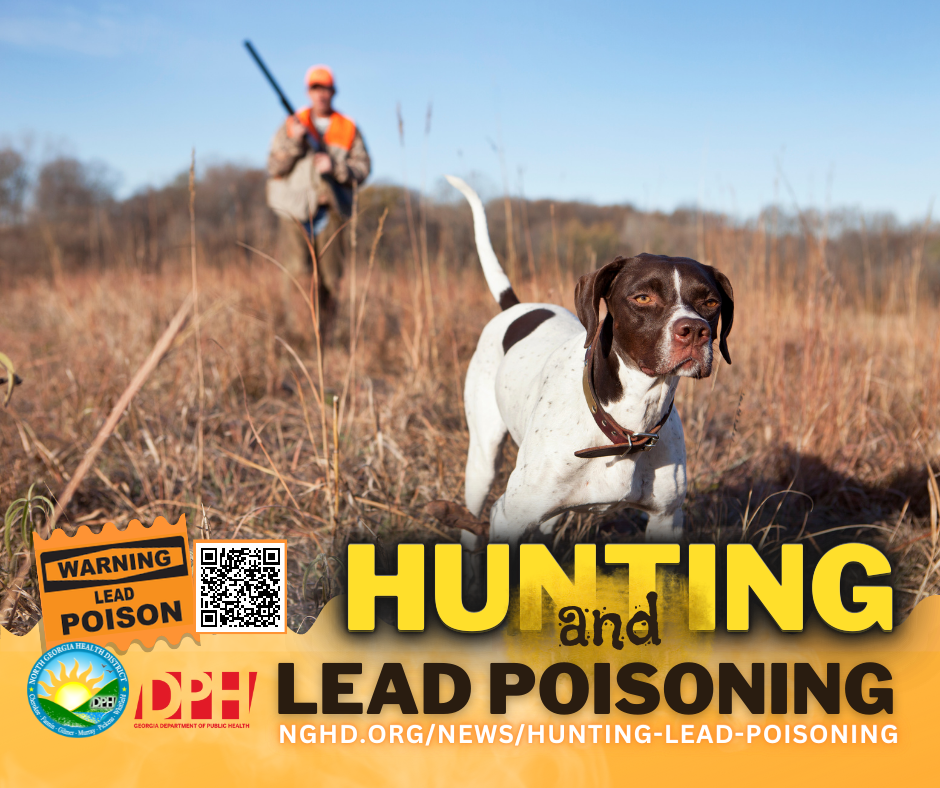 There are more than 15 million hunting license holders in the United States, with Georgia ranking 5th among the states at approximately 625K.

Over the centuries, hunting has largely evolved from necessity to sport; however, one of the lesser known potential dangers of both hunting and fishing remains: The risk for lead poisoning through lead ammunition and fishing weights.

Lead is a heavy metal that occurs naturally and is used to this day in many everyday objects as well as things that are used in certain occupations and popular hobbies.

When hunting, people are exposed to lead through lead ammunition fragments in the game meat. Also, lead residue is produced and breathed in when lead ammunition is fired. This happens with hunters or anyone else who enjoys the shooting lead ammunition. This means that hunters are both eating and breathing lead. But hunters are not the only ones affected by this lead. When game meat is taken home to be eaten, the family is now also exposed to the lead fragments in the meat. There are terrible effects of lead poisoning in adults, but consequences of lead poisoning in a child can be life changing.

Lead poisoning in unborn babies and children under the age of six is particularly dangerous. Lead affects the central nervous system, which includes the brain. Other organs can also be damaged. It is particularly dangerous in young children because it damages the brain and can cause developmental and physical delays as well as behavioral issues. The damage caused by lead poisoning is permanent and sometimes severe. Severe lead poisoning can also lead to death.

There was a study done by the Minnesota Department of Natural Resources that looked at how different ammunition fragments in venison and domestic sheep. In summary, it found that lead ammunition caused lead fragments to be found as far as 18 inches from the exit wound, and that the use of copper and copper-cased bullets (no exposed lead) significantly reduced lead exposure. The key findings and results from the study were copied and pasted below. Source cited on last page.

Copper and non-exposed lead core: These bullets averaged nine copper fragments in the animal with an average maximum distance from the wound channel of seven inches. By design, copper bullets leave no lead and the few fragments that were seen on x-ray were less than an inch from the exit wound. Overall, both bullet designs fragmented very little and left no lead.

Ballistic tip (rapid expansion): These bullets had the highest fragmentation rate, with an average of 141 fragments per carcass and an average maximum distance of 11 inches from the wound channel.  In one carcass, a fragment was found 14 inches from the exit wound.

Shotgun slugs: These slugs left an average of 28 fragments at an average maximum distance of five inches from the wound channel.

In December of 2021 the Minnesota Department of Natural Resources even agreed to allow only non-toxic bullets and shots in certain Scientific & Natural Areas (SNA) and certain State Parks that issue permits for special hunts. Non-toxic ammunition is also required when waterfowl hunting anywhere in Minnesota. There are no such rules in Georgia, but there are other states that are taking action to avoid the damages that lead ammunition has caused to wildlife. Bald eagles and other scavengers that feed on the carcasses of animals killed by lead ammunition are also lead poisoned. In many cases, the poisoning is so severe that it causes the animal to die. The health and ability to successfully reproduce is damaged in the animals that survive or are continuously exposed to lead ammunition fragments. Bald eagles and condors are particularly affected by lead poisoning, become severely ill, and never recover.

Hunting and fishing are great activities that require great skill. It is something that has been a way of life and a family tradition for many generations. However, knowing that it carries a serious risk to the development and health of unborn and young children is crucial.

Hunting can still be enjoyed with the use of alternative ammunition like copper ammunition and bow hunting. There are safer ways to continue to enjoy hunting and fishing for many more generations to come.