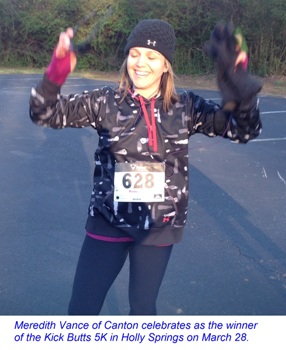 Holly Springs (GA) – Some came to run, others to walk. Many arrived to cheer. But it was clear that everyone involved in the Kick Butts 5K in Holly Springs, Georgia last Saturday was there to win the race against tobacco-related illness.

Presented by the Cherokee Youth Council and supported by Cherokee Focus and the North Georgia Health District, the Kick Butts 5K was a first-time Black Bag Race Series event that started at Holly Springs Elementary School and doubled back to the finish line at nearby Barrett Park.

Of those who competed in the race, all top three winners were from Canton.

Meredith Vance was the first place winner at twenty-five minutes and fifty-nine seconds. Kristina Meyer came in second, and in third place was Dane Viker.

Ryan Schmidt of Kennesaw placed fourth. Mindie Felcher from Marietta came in fifth, and Nate Hayward of Canton was the sixth place winner. 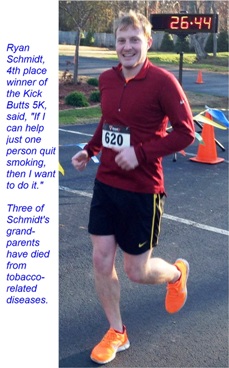 For fourth-place winner, Schmidt, this race was so much more than a competition.

“When growing up, I had a friend at eight years old whose mom died from lung cancer – she was only 31,” said Schmidt, now age 25. “More personally, I had two grandparents die from lung cancer and another from emphysema. So, yes, I take the fight against tobacco very seriously.”

Schmidt said other family members smoke and are starting to experience the negative effects of a lifelong addiction to tobacco. “If I can help just one person quit smoking, then I want to do it,” he said.

Anna Lee Stone, a senior at Cherokee High School in Canton and member of the Cherokee Youth Council, also lost grandparents to tobacco-related diseases, so she was motivated to make the fight against tobacco the focus of her senior project.

“Tobacco affects everybody, including kids,” Stone said. “If kids can start learning at a young age how it affects them, then chances are much greater they will never pick up that first cigarette or try using tobacco in any form.” 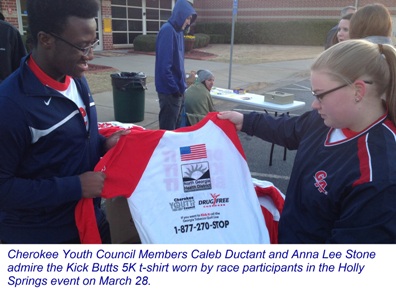 Caleb Ductant is also a Cherokee Youth Council member and is a senior at River Ridge High School in Woodstock. “This 5K is making people aware of the dangers of using tobacco and the effects of secondhand smoke on those around them,” said Ductant. “We’re letting people know they can stop the tobacco habit by going to the Georgia Tobacco Quit Line.” 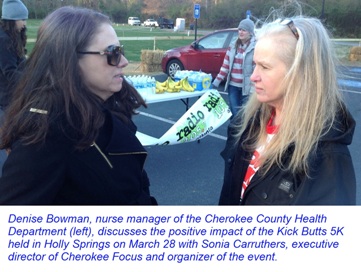 Denise Bowman, RN, Cherokee County Health Department nurse manager, was there in support of the Kick Butts 5K and promotion of the quit line. “The prevention of disease is our mission, and there’s no greater cause of some of the deadliest diseases among Georgians than the use of tobacco,” said Bowman.

According to Cherokee Focus Executive Director Sonia Carruthers, the Kick Butts 5K was created to support the Campaign for Tobacco-Free Kids and Kick Butts Day, an annual celebration of youth leadership and activism in the fight against tobacco. As part of the event, the Georgia Tobacco Quit Line was heavily promoted before and during the Kick Butts 5K so that people across metro Atlanta and beyond would become more familiar with the quit line and reasons to avoid tobacco.

“The valuable partnership of the Cherokee Youth Council, Cherokee Focus and the North Georgia Health District with Atlanta’s Radio 105.7 made this tremendous outreach possible,” said Carruthers. “Our goal is to encourage people to quit smoking and prevent kids from using tobacco of any kind; and this race, coupled with the radio advertising and live remote, was the best way we could think of to effectively spread the word about the quit line and the hazardous use of tobacco.”

As a result, the goal for the Kick Butts 5K was met and the race was won in at least one corner of the fight against tobacco.